The Tesla turbine is a bladeless centripetal flow turbine patented by Nikola Tesla in 1913. It is referred to as a bladeless turbine because it uses the boundary layer effect and not a fluid impinging upon the blades as in a conventional turbine. The Tesla turbine is also known as the boundary layer turbine, cohesion-type turbine, and Prandtl layer turbine (after Ludwig Prandtl). Bioengineering researchers have referred to it as a multiple disk centrifugal pump. 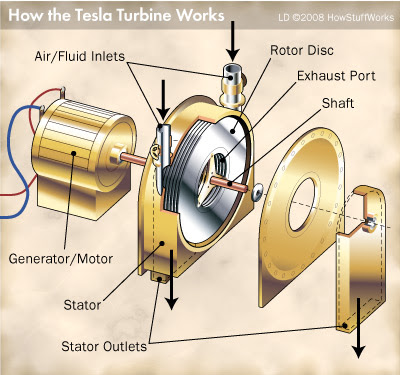 The job of any engine is to convert energy from a fuel source into mechanical energy. Whether the natural source is air, moving water, coal or petroleum, the input energy is a fluid. And by fluid we mean something very specific -- it's any substance that flows under an applied stress. Both gases and liquids, therefore, are fluids, which can be exemplified by water. As far as an engineer is concerned, liquid water and gaseous water, or steam, function as a fluid.

At the beginning of the 20th century, two types of engines were common: bladed turbines, driven by either moving water or steam generated from heated water, and piston engines, driven by gases produced during the combustion of gasoline. The former is a type of rotary engine, the latter a type of reciprocating engine. Both types of engines were complicated machines that were difficult and time-consuming to build.

Consider a piston as an example. A piston is a cylindrical piece of metal that moves up and down, usually inside another cylinder. In addition to the pistons and cylinders themselves, other parts of the engine include valves, cams, bearings, gaskets and rings. Each one of these parts represents an opportunity for failure. And, collectively, they add to the weight and inefficiency of the engine as a whole.

Bladed turbines had fewer moving parts, but they presented their own problems. Most were huge pieces of machinery with very narrow tolerances. If not built properly, blades could break or crack.

Tesla's new engine was a bladeless turbine, which would still use a fluid as the vehicle of energy, but would be much more efficient in converting the fluid energy into motion.


Posted by moses dhilipkumar at 07:43 No comments: