In today’s world, the rising oil prices is a matter that is really bothersome for all the automobile manufacturers and as well as to the end users. The fuel reserves are also fast depleting and we’re left with no means to replenish this highly precious driving force that powers each and every sphere of life either directly or otherwise. It is indeed perturbing that today’s trend of fuel consumption when extrapolated says that all these would last only for a few decades. Because of fast depleting fossil fuel resources and environment one way to secure our future is to use our resources as economically as possible.

The project titled “Exhaust powered automobile air conditioning” deals with the efficient way of running the ac compressor of the automobile with the aid of the exhaust gas. This project works on the theme of turbocharger in which a low pressure high speed turbine is placed in the exhaust gas manifold. The exhaust gas from the engine is made to rotate the turbine where the thermal power of exhaust gas is converted into rotary motion through turbine. This rotary motion from turbine is given to the turbocharger compressor which compresses the refrigerant vapor. So through this air conditioning effect is obtained without loss of any crankshaft power.

Generally by using ac in vehicle there is considerable drop of mileage of the vehicle. But by applying this principle there is no drop of mileage. Moreover the fuel is used more efficiently and economically. The crankshaft power is saved and this power is used in increasing the power of the vehicle. Owing to lesser fuel intake, the exhaust emissions will also be considerably reduced thereby avoiding much of unburnt hydrocarbons let out into the air. Thus by implementing this project we can ensure better fuel and environmental conditions. 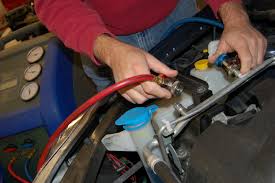 NEED FOR THIS PROJECTS
Our prime aim is to increase the mileage of vehicles especially petrol engine vehicles. By this we can save fuel economy from 15 to 20% and also we are conserving the waste exhaust power in a best way using turbocharger. Because 45% of the fuel energy is wasted through waste exhaust gas.
And also we need to equalize the performance of both air conditioned and non air conditioned(A/C & non  A/C ) vehicles. We reduce the the exhaust pollution (NOx,SOx etc...) since there is no utilisation of fuel for Air Conditioning.

As we know that in a turbocharger, the exhaust gas strikes the turbine (low pressure high speed turbine) and makes it to rotate the shaft. At the other end of shaft an impeller is mounted within the casing which compresses the atmospheric air to engine inlet, which increases the 35% of engine power(boost power).It compresses the air and gives boost pressure of 40psi.Since the type bearing used is Anti-friction bearing with negligible friction losses and also the type of coupling used is fluid coupling so there is a good power transmission with very high speed ranging from 30,000 to  90,000 RPM.
Likewise , Our innovative idea is about the application of this turbocharger compressor instead of A/C compressor in automobiles. so that we have made the A/C compressor to run just by using exhaust gas.

Posted by moses dhilipkumar at 10:19

I found your blog when I was looking for a different sort of information but I was very happy and glad to read through your blog. The information available here is great.
I know something information, to know you can click here
ducted air conditioning brisbane
Air Conditioning Installers brisbane

I found your blog when I was looking for a different sort of information but I was very happy and glad to read through your blog. The information available here is great.
I know something information, to know you can click here
ducted air conditioning brisbane
Ducted Air Conditioning Installers

Great article with excellent idea! I appreciate your post.

I wanted to thank you for this excellent read!! I definitely loved every little bit of it. I have you bookmarked your site to check out the new stuff you post. www.acs-advancedcooling.com

Can this system create 3-3.5kw power which is needed to run AC in car!??

Can this system create 3-3.5kw power which is needed to run AC in car!??

thank you for your great support sir

some problem it will occur

Did you manage to get it to work? Were the results on power and consumption as you intended?

Great post! This post provide the helpful and informative AC repairing services stuff. Thanks for sharing. Keep up the good work.

Very informative site about ac heating and air conditioning services this topic. , i must bookmark it, keep posting interesting articles...

A dedication of appreciation is all together to share such a dumbfounding information.........
Ac maintenance

This article gives the light in which we can observe the reality. This is a very nice one and gives in-depth information. Thanks for this nice article
best Nikai portable air conditioners 2019

Nice blog thanks for sharing
AC Service and Repair Medavakkam

Great information shared. I would really like to come back again right here for likewise good articles or blog posts.

If you are looking best and affordable electronic home appliance like refrigerator, inverter, washing machine, AC, geyser services Shop in Patna. Visit our shop and get best service at very chef price. For more detail fell free call us 8292943636. And visit our website.
Electrical Services Shop In Patna

Thanks you for sharing this unique useful information content with us. Really awesome work. keep on blogging Air Cooling Unit Manufacturer in Delhi